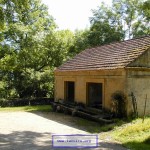 Cosy bed and breakfast in Burgundy near the villages of Thizy, Talcy & Blacy with three wash houses. Each of these villages has a wash-house. The one in Blacy would be the oldest  wash-house of Avallon.

Discover these wash-houses part of the Township of Isle sur Serein … Earth, stone and water … these are the elements that characterize this quiet and relaxing area.

Thizy: Given in the 12th century. the Bishop of Autun, joined by the Montreal Chapter of the 19th century. These lands will be sold as a National Property in 1791 and 1792.

The Castle: Built on a plateau from where it dominates the entire valley, is one of the oldest civil constructions and military vestiges of the earliest period of the Middle age. The Castle, whose primary function was a Priory. It use to welcome the Abbots of St. John Moutier. They had adopted the Benedictine rule dates back to Gothic Primary early 13th century almost behind the nose at the end of the 12th century.

May 15, 1372, Philip the Bold asked the inhabitants of Thizy « ensure, and keep watch in the fortress of Thizy, newly made and paired. » The Priory had thus become the Fortified castle.

The church next to the castle. In 1700, the roof collapsed after the last faithful of the King set foot outside. Rebuilt in 1707 in Tuscan style by a sculptor of the country, the altar of the Virgin and woodwork dating, 1774.

The careers: coming to Thizy at the end of the hike, you will see on your right behind the bushes, the old stone quarries once famous. They helped a sculptor Thizy (Cadoux) to build the most beautiful stairs of Chateau de Fontainebleau.

Blacy: A village that existed in the 8th century belonged to the Chapter of Montreal. It was surrounded by a fortified wall whose remains are still visible along the walkway leading from the Annoux road north to Thizy. The wash-house, nicknamed « The Fountain of Blacy » is leaning against the bank. Stone construction, supported by massive buttresses, it would be the oldest washhouse of Avallon.

Above all a rectangular inlet and an arched opening, gable, shed light on the inside. Two basins in cascade, monoliths and cut trough, receive a barrel fountain. Water comes out of the rock by a trough of two meters. The wash-house supplies a trough open pit located below the other side of the road. Officially dated 18th c.It is in fact the 17th century.

After that the church rebuilt in the 18th century has retained the 13th century shrine and inside, several wooden statues remarkable 17th century. In addition see: the two strong houses turret in the center of the village date back to 15th and 16th century. One of them is still in very good condition.

Talcy: This is one of the oldes tfiefdoms of the township. At the entrance of the village, we see a very beautiful cross of the 18th century with 4 twists based on a 1850 base. It is dedicated to St. Peter, patron of the parish, against contagious diseases.

The church, of the late 15th century, is, with its lava roof, hanging on the hillside. Listed as historical monument, its lintel is decorated with two geniuses holding a skull and a bust of St Peter.

We provide dinner prior to a booking at our cosy bed and breakfast.

Feel free to contact our cosy bed and breakfast for accommodation when visiting the area.