Close to our charming guest rooms, next to Massangis, the Annoux forest invites you to a bucolic walk to discover an ingenious invention. It was designed in the 1790s. At the end of a path, you will discover a square tower with a strange mechanism at the top. 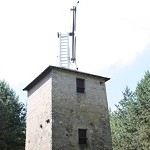 This is the telegraph tower invented by Chappe. There were 550 telegraph tours all over France in order to be able to relay messages in a few minutes or a few hours depending on the distance, whereas it took several days with a horse messenger. Each tower was erected high in a clear place, each a few kilometers apart.

To date, only about twenty towers remain, some of which have been restored, such as Annoux, which was built in 1809.

It has at its summit a system of articulated arms, called regulator, of 4.60m with at each end a 2m indicator that can represent 92 positions thus forming the signals. These signals were transmitted in groups of two. The first corresponded to the page of a manual of 92 pages. The second to the number of the line (92 lines per page). On these lines, Claude Chappe had written a word or a group of words, mainly having a direct relationship with the army, administrations and diplomacy. Two people, stationary, were on the second floor of the tower. By means of long sight, they watched the signals of two surrounding towers. Massangis and Pisy. One observed the signals emitted, the other reproduced them in the direction of the next tower. Thus a message leaving Lille arrived in a short time in Toulon having crossed all France.

Annoux’s Tower of Chappe was restored in 1994. Its mechanism restored by the students of the National School of Arts and Crafts and installed in 1999. Visits and demonstrations are planned throughout the year.

Feel free to check the availability of our charming guest rooms for your accommodation by visiting the region.