The name of Semur appears in 722 in the foundation charter of Flavigny Abbey. The etymology of the name would be “sine muros”: old walls. Take advantage of  your stay in our holiday house accommodation in Burgundy, to visit this medieval city.

Welcome to the medieval city of Semur located on a meander of the Armançon, well established on pink granite. 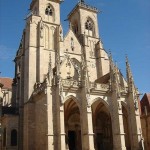 Today, the medieval city is very forward looking, and supports this important area of historical heritage under preservation. The city has the label “secteur sauvegardé” (preserved area).

Once bustling with many spinning mills, tanneries and guilds, Semur-en-Auxois retains many testimonies of a rich and eventful past. The existence of the city, in the fifth century, is associated with the memory of one who introduced monasticism in Burgundy, Jean Réôme, founder of the abbey nearby Moustiers-Saint-Jean before 450. It is also in Semur that was written the deed of foundation of the Abbey of Saint Pierre de Flavigny in 719. In the eleventh century, like many other cities, Semur included a castle, a town and suburb.

One enters the city by the Gate Sauvigny (XV century). Alas for the modern visitor, a 1753 ordinance ordered the demolition of several towers. The four corner towers of the Castle of Semur, however, give an idea of ​​the powerful defense system built to withstand the artillery of Edward III of England in the sixteenth century.

Take advantage of  your stay in our holiday house accommodation in Burgundy, to visit this medieval city.