Welcoming B and B:Pontigny Abbey

Close to our welcoming b and b in Burgundy, is the former abbey of Pontigny one of the oldest sites of the Cistercian order.

Discover the biggest Cistercian church in the world.

Second foundation of the Cistercian monastery of Citeaux. Established in 1114 on the borders of the old diocese of Sens, Auxerre and Langres, between Champagne and Burgundy. It was founded by Hugues de Macon, Saint Bernard companion. The large church, still intact today is 120 meters long. 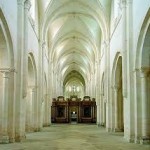 It used to be said that on the old bridge that crosses the River Serein on the edge of the village of Pontigny, three bishops, three counts and an abbot could sit down to dine and all be on their own territory.

Here was a meeting of ecclesiastical and political domains that today have faded from memory. As one crosses the bridge unaware of any borders (there is though, a perfect spot at the bridge where the party could dine!). Close to the bridge, an avenue of trees leads past surviving monastics buildings to the huge church of the old Cistercian Abbaye de Pontigny, founded in 1114.

The lower part of the pale, heavy structure is Romanesque and austere. Whereas the upper part early Gothic, has a single low and uneven octagonal tower on one corner. An abbey that provided refuge to Thomas Becket, Archbishop of Canterbury. It was during his exile in 1164 (two years later, back in Canterbury, Becket was murdered).

« Friends of Pontigny » association work for the preservation of this remarkable site. They organize all year musical or artistic events in this magical place.

Feel free to contact our welcoming b and b for accommodation when visiting Pontigny.