For lovers of nature, hiking, swimming and cinema, here is a place to discover, a few kilometers from our charming guest rooms, in the Morvan Regional Park. The fortified village of Pierre-Perthuis. Located on the road to Saint Jacques de Compostela, you will be charmed by this unique and wild place. Here architectural and geological curiosities are for the pleasure of the eyes. 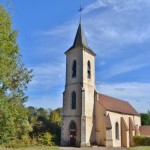 You must follow a small path to the edge of the Cure to admire the two bridges that span. The large 33 meter high bridge was built in 1872. It is still used for the passage of vehicles.

Below the small bridge, called Roman Bridge, but its real name is the bridge of Ternos or Vauban Bridge. It was built around 1670. It still has on each side large stones called wheel hunts that protected the wheel deck of the carts at the time. For movie lovers, a big mop scene was shot here. Imagine Louis de Funes and Bourvil (famous French actors) pursued by the Germans, crossing the bridge. Legend says that the cliff above the bridge collapsed, taking the church steeple with its silver bell. Today we can still hear the bell ring, but it is only the sound of water that passes under the small bridge that generates a crystalline sound.

Another path will make you discover a natural geological wonder: the pierced Rock. It is a cliff of more than 15 meters high forming a natural arch. Let’s end this bucolic visit with the small bridge of the Vernais restored in 2014 thanks to a subscription launched by the Heritage Foundation. It is located on the old Roman road that connected Lyon to Boulogne-sur-Mer.

Do not hesitate to use our charming guest rooms, for your accommodation, during your visit to the region.