Hospitable b and b: Vezelay

Not far from our hospitable b and b in Burgundy. From June 20th to June 21st: midsummer light path at the Basilica St. Madeleine in Vezelay. 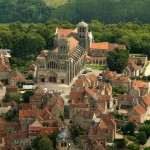 In the Basilica of Saint-Magdalena in Vezelay. A phenomenon occurs at the summer solstice, around noon, a well-known activity repeatedly photographed and described: along the nave, although in its axis, forms a chain of nine large patches of light produced by the sun through the high windows of the basilica; these spots are roughly circular; they move along the nave progressing to the choir.

Dates of the phenomenon
1 – It takes place on the « summer solstice », so it depends on the declination of the sun and, thus, we can be assured that should appear several days before and several days after the solstice since, during the two weeks in first approach, the overlap at June 20 or 21, the declination of the sun hardly varies; in 2008, for example, it remains above 23 ° from 10 June to 2 July included. In the 1100s it was the same but the date of the solstice, rising in the Julian calendar, was located around 13 or June 14

Fell free to contact our hospitable b and b for your accommodation when visiting Vézelay.