Fine b and b:Great Buffon’s Forge 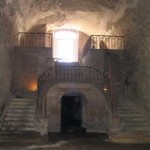 Located near our fine bed and b in Burgundy, the forge is a remarkable example of the Century of Enlightenment.

The Great Forge was built in 1768 by the French naturalist, the count of Buffon.

At the river level are the furnace, the refinery and the foundry. At the above level stand the workers lodgings and the garden kitchen.

Georges-Louis Leclerc, the Count of Buffon (1707-88) was a distinguished scientist and naturalist of his day. At the age of 28, he bought the local 10th- to 13th-century château. A former residence of the Dukes of Burgundy, and proceeded to knock most of it down.

In its place he put a handsome park and botanic gardens. It is now called the Parc Buffon, and turned the two remaining château towers into a library, laboratory and museums. Buffon’s life work was to write a complete history of nature, the 36-volume Histoire Naturelle, which took him 50 years to complete. His stables are now the Musée Buffon, which deals with the man himself rather than his scientific work.

In old age, Buffon created the out-of-town Grande Forge de Buffon, a small riverside ironworks designed both for scientific research into the ores and for their commercial exploitation.

Feel free to contact Carpe Diem’s fine b and b for your accommodation.