Clinging to its rock isolated by three rivers. The village of Flavigny-sur-Ozerain is nestled in a charming site. It smells of anise … Our charming guest house is located just a few kilometers from this beautiful listed village. 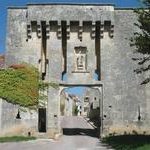 Former seat of an abbey from the 8th century, a strong city in the middle Ages. Flavigny reveals its past grandeur in its narrow streets lined with old hotels. Superb fortified doors and the remains of its ramparts.

This pleasant village is surrounded by a countryside that reveals itself between churches and washhouses. Here spring the mythical sources of the Seine with first the main source, sheltered by a statue.

The former Benedictine abbey founded in the 8th century. It included a large abbey church, St. Peter’s basilica and its cloister buildings.

The anise factory is housed in buildings rebuilt in the 18th century. It has been run by the Troubat family since 1923. About 250 tonnes of these little white candies leave the factory each year.

The 13th century Saint Genest Church is built on the site of an older church. It was altered in the 15th and 16th centuries. Among many interesting statues, there is an Angel of the Annunciation. A masterpiece of the Burgundian Gothic School.

Remarkable old houses in the street of the church. The Donataire house from the 15th and 16th centuries. It hosts the Society of Friends of the City of Flavigny. At the bend of the alleys of the village, many restored houses, dating from the end of the middle Ages and the Renaissance. Some have charming turrets, a spiral staircase or even delicate sculptures.

Contact our charming guest house near to find out about our accommodation availability.