Druyes-les-Belles-Fontaines is located a few kilometers from our charming guesthouse in Burgundy. It has a castle with an unbroken square courtyard. One of the cradles of the family of Courtenay and the testimony of the constructions of the reign of Philip Augustus. 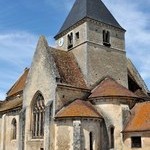 Each of the walls of the enclosure is made up of 100 royal cubits (53 meters of side). Certainly, the inner palace no longer exists but the chance you have at Druyes is to have a castle whose enclosure is almost intact. The last major restoration is the rampart wall. This, between the south towers and the chapel. The current owner bought the castle in 2003. It is related to his personal, sentimental History.

Hoisted on a rocky peak, in the village above. We have access by an ancient gate. The fortress of Druyes was perhaps built by Pierre de Courtenay, emperor of Constantinople. It belonged to the Counts of Nevers and Auxerre.

The model of the castle in the 17th century reveals that the castle was important. From the promontory, which runs alongside the fortified enclosure, one has a superb view of the lower city: its springs, with the lake, the Romanesque church dedicated to Saint-Romain.

Druyes, village of character, also has a nice old bridge, a restaurant and a classified lime tree.

If you stay a few days in the area, do not hesitate to contact our charming guesthouse in Burgundy, for your accommodation.