Not far from our fine guest house in Burgundy, you can rent bikes from the Cravant Tourist Office, and wander along the Canal du Nivernais. 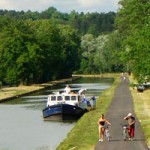 Rentals are at opening hours of the Tourist Office. Are provided: A map of the cycle route, a lock and a repair kit. Helmets and bags are also proposed.

Clamecy-Auxerre by bike through the towpath of the Nivernais Canal and its « green lane ». The Nivernais canal built in the late eighteenth and early nineteenth century, connects Decize to Auxerre, the Loire basin to that of the Seine.

Deserted, as all the narrow channels gauge by barges to transport. It is now frequented by boaters around the world attracted by the beauty of its wilderness course. The quality of its structures. Very rich in monuments cities at villages along. A bike route through its towpath interface are part of the « Tour of Burgundy by bike ». Thirty kilometers are converted into « green lane » as a route for pedestrians and non-motorized traffic. For bicycles, skate board etc…

One would require two to three hours to visit Clamecy historic old city where lived Claude Tilier, author of the unforgettable Mon Oncle Benjamin, birthplace of Romain Rolland and keeps the memory of its floats, who in the early fifteenth century to the twentieth century, bringing trains of firewood along by the river Yonne from the Morvan to Paris.

Carpe Diem fine guest house is near Cravant along the Nivernais canal.