Carpe Diem: an accommodation near Montreal in Burgundy. 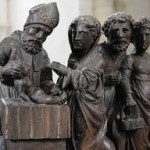 This charming village in the Yonne was built in the 6th century by Queen Brunehilde. Between the 11th and 12th centuries, it was a strategic position between the Duchy of Burgundy and the Duchy of Champagne. At that time, the village perched on top of a hill, in the Serein valley, became a stronghold with its castle and its collegiate church. Today, the castle has disappeared. Only the magnificent collegiate church which overlooks the village remains.

In 1521, François 1er made a visit to Montreal. You can still see a symbol engraved in a stone: the salamander. Henry IV had the fortifications demolished. From a stronghold, the village became an agricultural town.

Montreal, which comes from Mount Royal, is associated with five other municipalities, association of Montreal of France.

Today, the village deserves an in-depth visit to discover, in addition to its 12th century collegiate church housing 16th century carved stalls, the fortified gate at the bottom of the village, the priory, the magnificent medieval houses, postern.

At the top of the village, the cemetery which surrounds the collegiate church offers a magnificent view of the whole valley.

Guided tours are organized by the Grand Vézelay tourist office.

The association, Montréal en lumière, organizes a night show, retracing the thrilling history of this village.

Do not hesitate to contact us for a charming accommodation near Montreal in Burgundy.