Our accommodation in Burgundy is a few kilometers from the Eternal Hill.

It is a great mystery hidden in the depths of the hill of Vézelay and under its basilica. Cellars and underground passages meander under the houses. 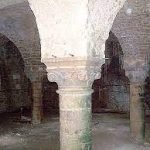 The treasures were hidden in public view. Like a religious building, you can admire the vaults, pillars and sculpted capitals. We discover vast vaulted rooms with cupboards dug directly into the rock, interior staircases and sometimes fireplaces.

Most of its cellars are private. The largest of these underground rooms is located under the former cloister of the abbey. It served as a rainwater reservoir. The village had no source.

This entire underground network raises many questions about its use at that time. Studies were carried out in the 19th century, providing only hypotheses.

The most likely would be the use of its rooms as shelters for pilgrims. Between 1050 and 1250, Vézelay was a great sanctuary in Western Europe, thanks to the presence of the relics of Mary Magdalena.

Vézelay being built on a rocky outcrop, the development of the basement was the only way to gain space. The cellars could also have a commercial function: storage spaces, places of exchange or craftsmen’s workshops.

These underground spaces retain all their mystery today. This fragile and sometimes forgotten heritage remains largely inaccessible. Secrets remain hidden in the depths and darkness.

Remember to check the availability of our accommodation in Burgundy when preparing your stay in the region.